Once a year in the crystal waters of Fakarava, in French Polynesia, a fascinating and unique event takes place. For a moment the marine animals are agitated like nowhere else. Huge schools of groupers gather to reproduce. For many specialists, this moment is one of the most complicated behaviors to document. Of course, if it's possible to anticipate and determine roughly the range of this underwater meeting, arriving at the precise moment would be considered easy. However, the grouping of the groupers lasts only a few minutes, this means a small dose of patience and a large dose of luck. Laurent Ballesta, an underwater photographer, gave himself a mission; to be the first to photograph this phenomenon. 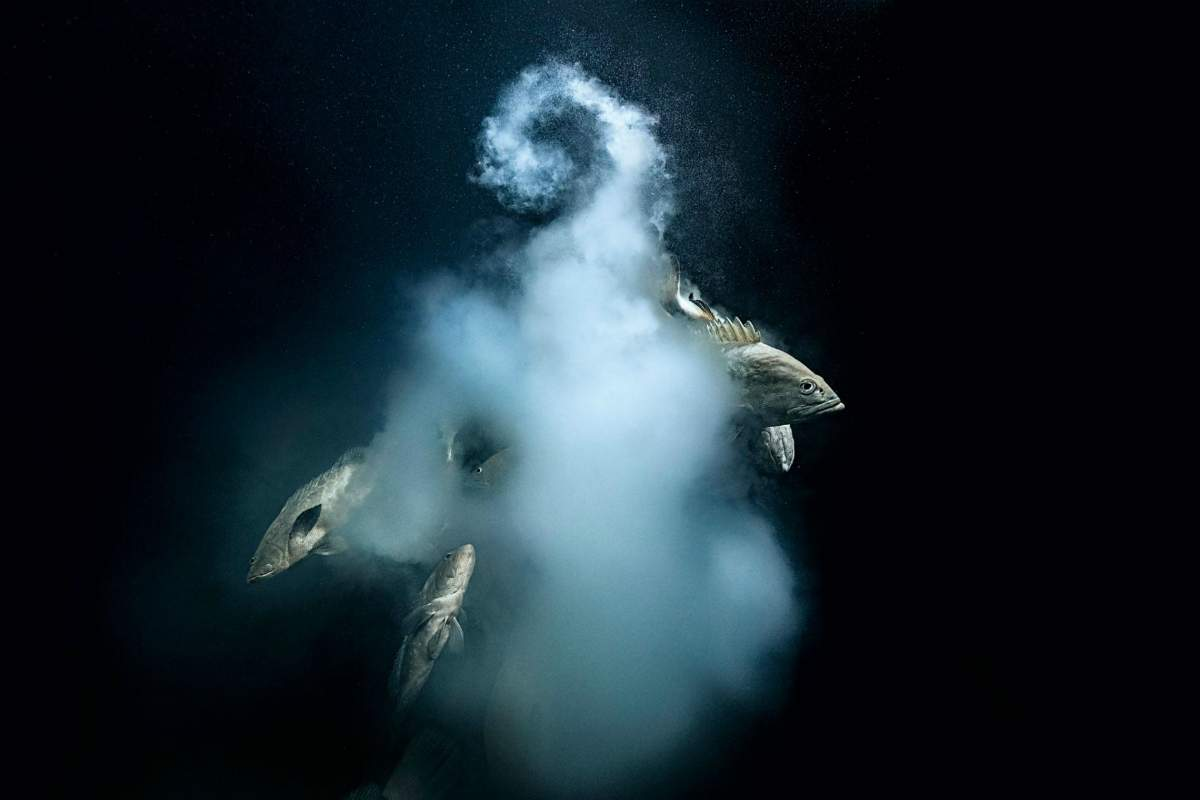 This is a huge challenge. He started by looking for a solution that would allow him to be closer to the fish and stay there long enough not to miss the egg. He thus finds a way to develop a protocol of diving allowing him to spend 24 hours in 20 meters of depth. To carry out his mission, it took him months of testing to arrive at an optimal calibration in order to determine what would be the ideal and exact mix of gas in his oxygen tanks to secure his safety. The team designed a semicircular device on which a set of stroboscopes and a continuous light beam were attached. One of the divers then has the task of directing the bar towards what the photographer wanted to take pictures of. Once everything was in place, it was time to launch the expedition. 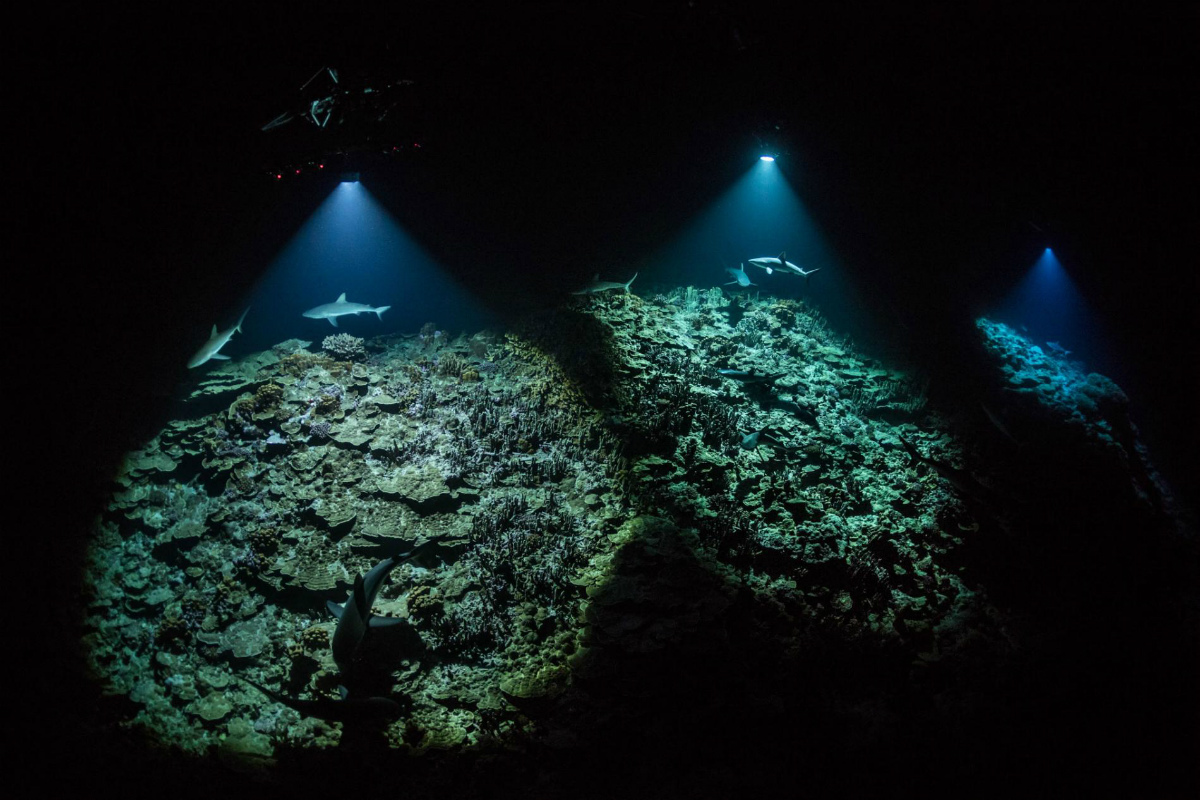 In 2014, Ballesta finally began his project. Members of his team would come down at regular intervals to change his oxygen cylinder and to illuminate the ocean at night. As the groupers are gathering, just as anticipated, a group of large gray reef sharks started aiming straight for Ballesta. However, when asked if he was afraid, considering he had no protective equipment, he replied "we had to be confident enough to remain calm, even when the sharks hit us, sometimes so strong that we had bruises. We were obstacles in their eyes, not prey.” Everything was happening simultaneously! The groupers were going to lay eggs and the sharks were zoning in on them to prepare themselves for their dinner. Ballesta was the witness of a unique and rare show of nature to which he was one of the first to ever witness. 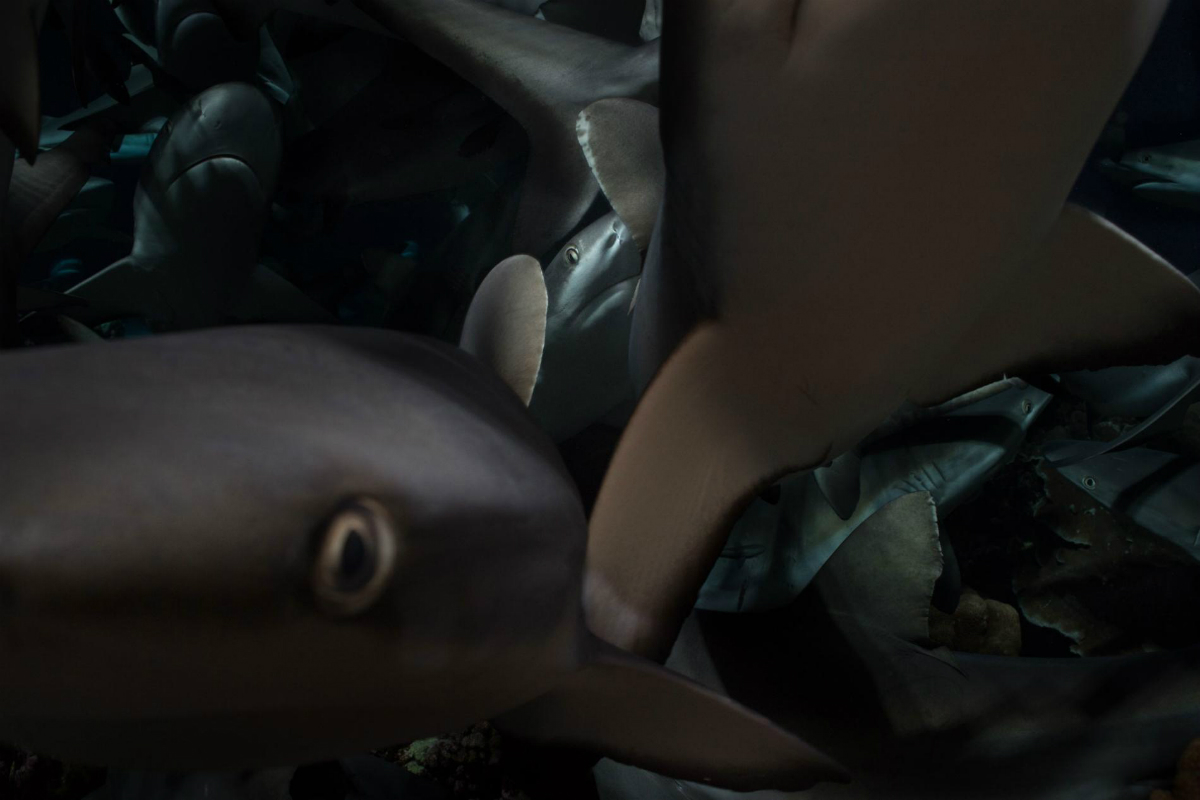 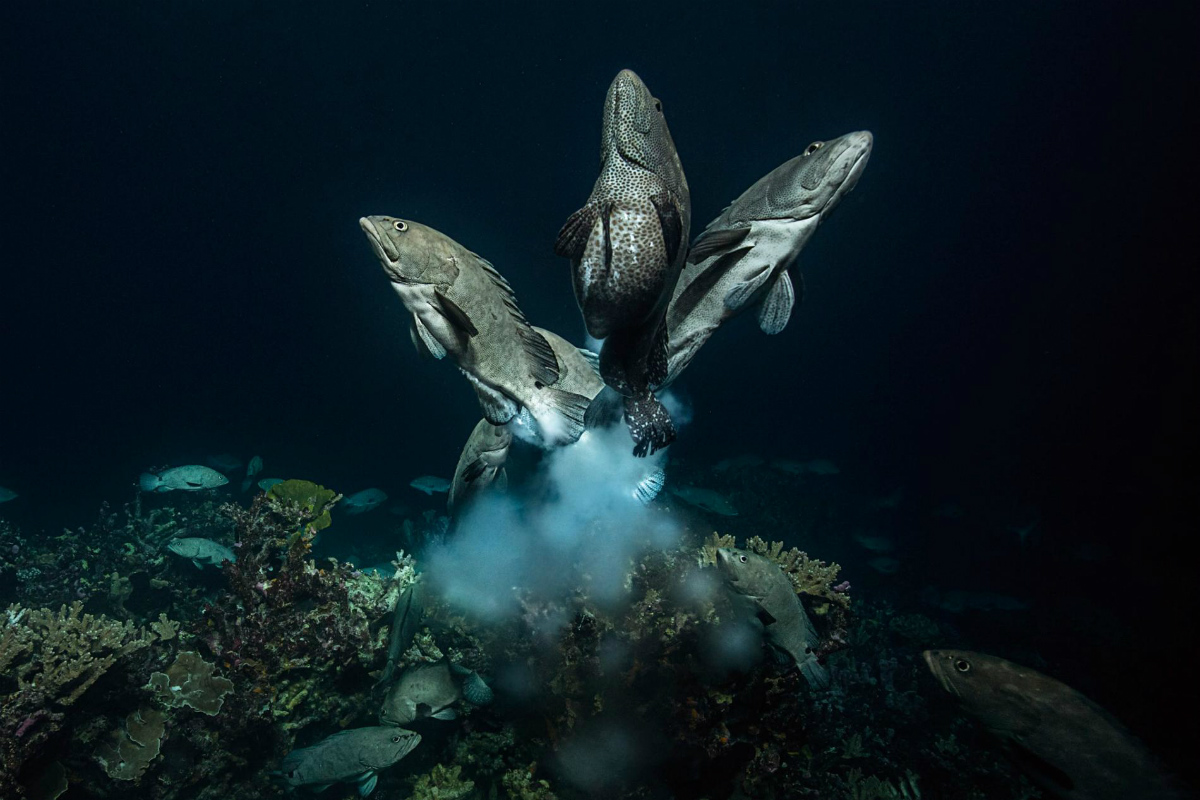 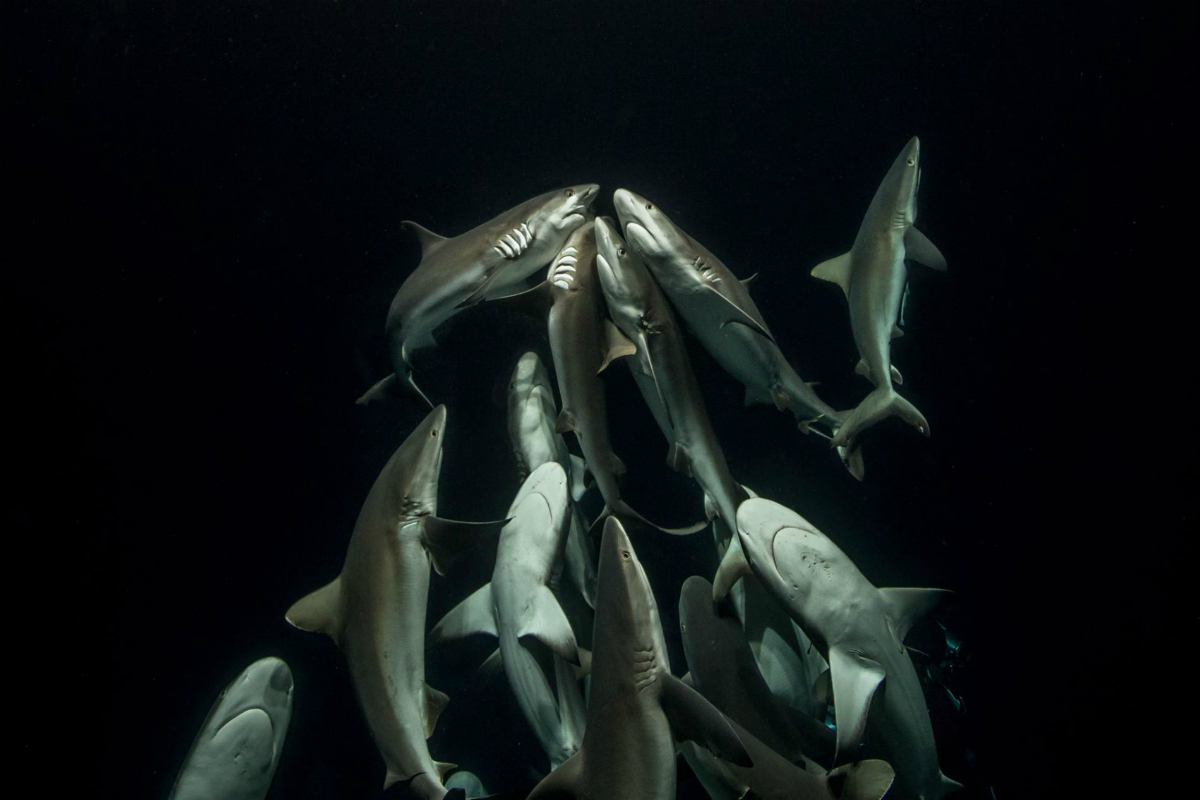 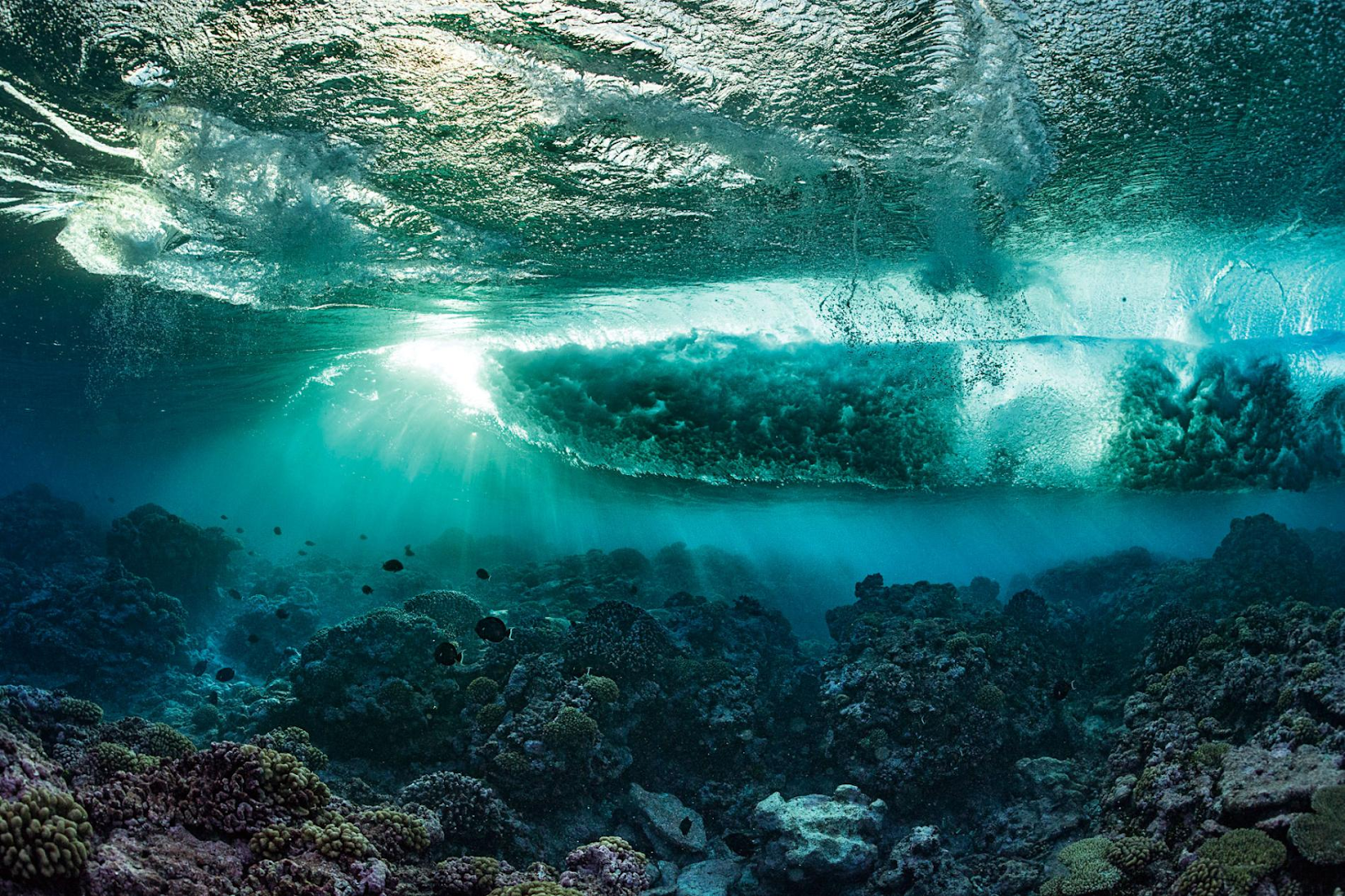