What is digital speed painting?

Let’s start from the beginning. Digital speed painting wouldn’t exist without the original form of this artistry. The pioneer of speed painting in the United States, was Denny Dent. He introduced the concept with live performances in 1981. At the time, Denny was named a performance artist. He would frantically splash, dab and spill paint onto a 6-foot canvas to produce portraits of celebrities. Using both hands with three brushes in each, he quickly became known for being the world’s fastest artist, despite turning down a mention in the Guinness Book of World Records. With that, speed painting was born. 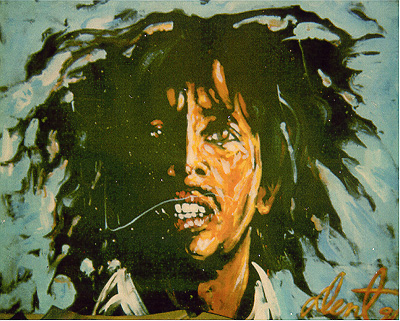 However, the first appearance of digital art wasn’t until the 1990s in underground computing circles. The art was initially practiced by followers of digital painting for who artistic creation compared to computer programing. In the matter of only a few years (filled with the advancement in technology), "speedpaint" had also become known as a session of visual art programing, usually sped up and set to music, showing an artwork quickly made within the program.

As per usual, in today’s society, the place to be discovered is on the web! One of the first digital speed painters to gain popularity was a Youtuber; Argentine illustrator and filmmaker Nico Di Mattia, in 2007. In his video, he illustrates a portrait of the Radiohead singer Thom Yorke, using the digital drawing process.

The art then developed with the arrival of platforms like DeviantArt or ArtStation or video-sharing portals where today you can find hundreds and thousands of time-lapse speed paint videos.

Smoking on portrait from LEO LARDY head of production at Meero

In the life of a digital speed painter

Whether you’re an art lover or a photoshop fan, let me give you an insight into the life of a digital painter. Speed painting requires a lot of patience, the duration can be anywhere from 2 to 10 hours.  The artists believe the first 30 minutes of the painting is the most important. This is where the painting initially takes its shape. The creation of the foundation of the painting. Detailing comes later.

The videos are then edited in order for the viewer to experience a small time-lapse 5-minute video, with amicable music to inspire. This allows for the focus to turn away from the final work and truly appreciate the performance and creative process itself. Digital speed painters usually use this as a practice to work efficiently and diligently.

Who is speed painting for? Well, it’s mainly for the artists who feel they need to brush up on their skills and sharpness in detail. It is a way for them to exhibit the subjective skill they likely felt was weak. Speed painters also use this form of art as a way to sketch their work before creating the final piece. Like they say, “practice makes perfect!”

Yes, there are different types of speed painting. Two actually. (mentioned above) but let me go more into detail. The first and more traditional approach is where images are created on canvas and paper using paints, pencils, etc. (aka Denny Dent’s work). The main advantage to the traditional approach is that you have the physical work in your hands at the end. Meanwhile, the digital method does not offer a tangible end result but it does allow for other profound aspects.

While a traditional painting requires hours of installation, equipment and the natural delay of drying, giving a computer and a graphics tablet to a speed painter gives them a free rein to their talent. At the end of the stylus, there is a rich palette of 16 million colors. The computer software also comes with multiple options in brush sizes, boldness and more. Photoshop further allows for great storage options; this is much appreciated by the artists, as the graphic software saves each individual step, meaning you have the opportunity to go back and change any undesirable effect.

Being a traditional artist, all you need is a pencil and paper or paint and a canvas for your artwork. When it comes to digital painting, the high-performance computer, high-quality graphic cards, and processors, graphics tablet and Photoshop, of course, are necessary. Last but not least, don’t forget your screen recorder, such as QuickTime Player, in order to record the screen while the art is being produced. With regard to further editing the recorded video, you can use video editing software such as iMovie or Adobe After Effects. Nonetheless, before uploading to Youtube, remember to use a license-free song as background music, or else your video will be deleted!

Art created in a time-lapse, who knew.